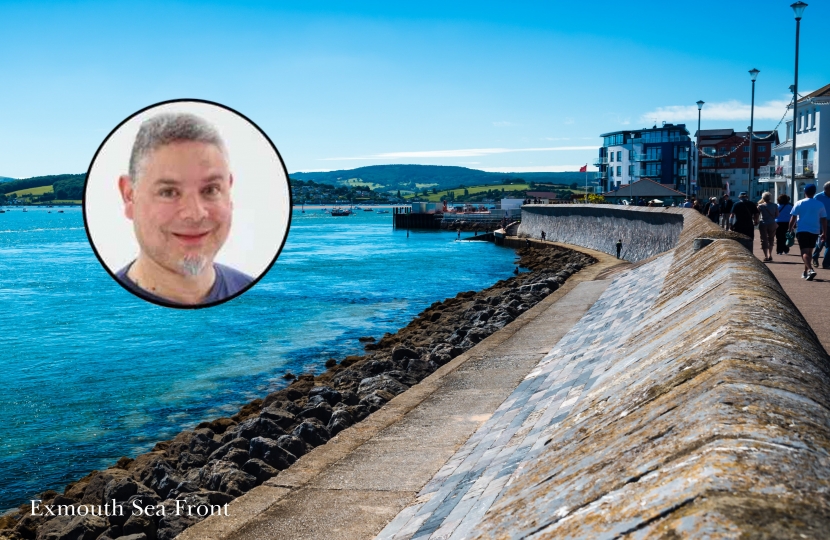 “The first 100 days of a new administration at East Devon District Council is no cause to celebrate for residents of Exmouth” says Chairman of East Devon Conservatives and District Councillor Bruce De Saram where Exmouth barely rates a mention.

Despite remaining the largest single group on EDDC the Conservatives respect that electors wanted change based on a manifesto of Openness and Transparency repeatedly promised by the new administration comprised of some of those elected as Independent Councillors, but that promised change has stalled already.

He added “Little has changed since the election in May where the new administration says that their first priority has been to provide continuity, which begs the question as to what the previous Conservative administration was doing badly that needed change”.

In the case of Exmouth, Openness and Transparency has been ditched pretty quickly where the new administration did not bother consulting with Exmouth ward members or key stakeholders about their half-baked decision to close down the Exmouth Regeneration Board, replacing it with the Queens Drive Delivery Group.

Plans to hold the meetings of the new group in private have been heavily criticised by other councillors for the lack of Openness and Transparency, as well as the narrow remit of the proposed Group.

There is scepticism, despite an assurance from the Leader of the Council Ben Ingham that there would be further consultation in November and December that this new Group would offer anything new.

Cllr De Saram added: “Given the Exmouth regeneration board was already up and running, there is clearly no immediate urgency to replace it, particularly as plans already include phase 3. The proper way to present the proposal for change would have been to consult first with ward members, stake holders and other interested parties on what they felt was the right way to move forward, not bring this forward under the guise of an urgent item and effectively a done deal.

Speaking at a meeting of the joint EDDC Overview and scrutiny on the 5th of September Councillor De Saram requested that Para 2.8 of the agenda item which says, "It is recommended that in 2 years’ time, there will be a review of the project to assess its continued need,” should be changed to take into account there is more to Exmouth regeneration than just simply Phase 3 on Queens Drive” Exmouth deserves better than this.

His view was endorsed by another Exmouth ward member Cllr Maddy Chapman who said that residents in Exmouth would be watching carefully to make sure that the regeneration project continues to take place.

Meet your MP at the Tumbling Weir

The West Hill branch organised a Sunday Lunch and a chance to meet our new MP Simon Jupp at the Tumbling Weir in Ottery St Mary. A good time was had by all and Simon's address went down well with the guests.