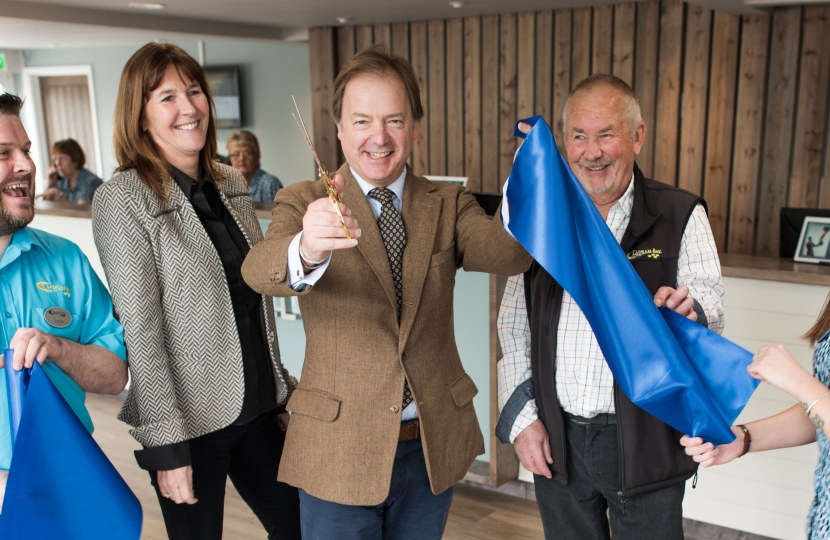 East Devon MP Hugo Swire was given a behind-the-scenes tour of a major holiday park in his constituency this April after it put the finishing touches to a £10 million redevelopment project.

The family owners of Ladram Bay Holiday Park near Budleigh Salterton invited Mr Swire to see the changes and to meet park staff as it gears up for the 2016 holiday season.

He was accompanied on his tour by park directors Zoe House and Robin Carter, two of the four siblings whose family has owned the park for over 70 years.

The MP, who is also Minister of State at the Foreign and Commonwealth Office, heard that holiday bookings are already up by 10 percent compared with this time last year.

Helping to provide an even more memorable experience will be the new facilities completed last year, including a new swimming pool complex and Jurassic-themed adventure golf course.

This winter has also seen further improvements such as the newly made-over customer reception area which Mr Swire declared officially open during a ribbon-cutting ceremony.

Mr Swire commented: "It was a pleasure to visit Ladram Bay once again to open their new reception and view their new facilities. The business continues to thrive and grow, which is good news for local employment and the wider East Devon economy".

Other developments fresh for 2016 include improvements to Ladram's Seaview Shack on its private beach where families can hire boats and watersports equipment, and enjoy light refreshments with stunning views along the coast.

There are also additional brand new holiday homes with the emphasis on five-star comfort, and early summer will see the installation of new super-luxury glamping pods.

Mr Swire was also shown a pair of colourful historic gypsy caravans which the park has had in its proud possession for many years, and which have now been renovated using traditional construction skills and hand-painted decoration.

The MP congratulated the Carter family on their long history of providing top quality and good-value holidays to tens of thousands of Devon visitors each year.

The park's high standards have been recognised with a raft of awards, and Ladram now boasts a top five-star accolade from VisitEngland, putting it among an elite of UK holiday parks.

Zoe House said the family was delighted that Mr Swire was able to take time out to visit the park and officially open the new reception area:

"We are always mindful that holiday experiences are created not just by facilities, but also by the warmth of welcome and sense of hospitality which is provided," said Zoe.

"At Ladram, this is delivered by our loyal and hard-working staff team to whom we are very grateful for their commitment to giving our guests the very best possible time," she added.

There is more information about Ladram Bay Holiday Park at www.ladrambay.co.uk