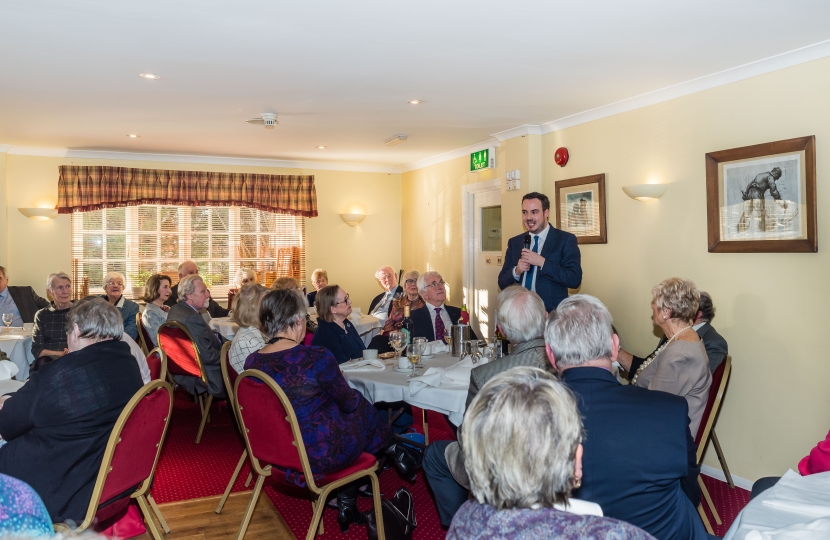 As we were holding our first Branch Committee last January little did we imagine that we were about to experience a year of so many unknowns.   COVID19 had not been heard of let alone any clues of the stranglehold the virus would have on so many aspects of daily life.   Freedom of movement, meeting people, shopping, holidays and so the list continues.   This was all so sad because we were still fresh from the marvellous General  Election result which saw  our excellent candidate, Simon Jupp, win.   He had achieved the highest number of votes ever in East Devon, soundly beating his nearest competitor.    Our Winter Lunch held shortly after this first meeting at the Tumbling Weir Hotel was a great success, and our new MP was the guest speaker.  He demonstrated that he was already in full flight in his new job.

In January we belatedly wrote to Sir Hugo Swire to thank him for his contribution to East Devon and invited him and Sasha to our February AGM, but he had to decline due to his attendance at the Commonwealth Enterprise & Investment Council for which he is Deputy Chairman.

We were able to hold our AGM, once again with Simon Jupp as our guest speaker

During the year the Branch held two normal Branch Committee meetings before the pandemic announcement and thereafter from April a number of Zoom  (Virtual)  Committee meetings.    This was a complete new world for most of us, but members of the Committee entered into the spirit of the technology, and worked together to master the process.   We held Branch Zoom meetings in June, September, October and November.    Together with a sub- Committee meeting in September to prepare for the November 5th Branch Q & A event.

At the June meeting, given that we had only held two events this year, Ian Heard suggested we might consider a Chairman’s Summer Appeal which received unanimous support.   The Appeal included a Draw for 3 prizes and the final result raised £840.   This certainly made up for the St George’s Day Dinner and Curry Lunch which had to be cancelled.

In August, a few members of the Committee visited Bovey Down Farm to determine if we could hold a Branch event there.   Simon Jupp was invited, and made the Draw for the Chairman’s Summer Appeal Draw which selected the three lucky winners.    Unfortunately, the venue was considered unsuitable for a West Hill style event.

In November, we held our first Virtual (Zoom) event for members and supporters with Simon Jupp as guest speaker.   He provided some very interesting insights of national interest as well as the many activities he is involved with in the Constituency.   The event raised £219 which included the Draw for which there were three prizes.

During the year the South West Conservative Association held its annual Conference in Torquay and was well attended by members of the Committee.   This was a particularly outstanding conference with impressive speakers.   The South West Association has held a number of Virtual events, including Priti Patel and Boris Johnson as guest speakers.     The Party joint Chairman Amanda Milling  also held a Q & A which was well attended.   The CWO (Conservative Women’s Organisation) held a most innovative Great Balloon Debate fund raising event.   Your Committee members have attended these.

To keep in touch with our members and supporters we have produced three Newsletters, the latest being for Christmas.  We hope these have been well received and demonstrate that the Branch has not been idle.    In fact, the Branch has raised £2750 this year from our various events, in spite of the fact that we had to cancel four of our 2020 programme events.

Our President, Roger Tanner, has sadly formally resigned during the year.   Roger has served the Association for a long time, including West Hill Branch Chairman, Chairman of the Tiverton & Honiton Association, as well as our President.   His experience and knowledge of the Party Constitution has been most valuable.     Naturally we have expressed our thanks to Roger for his long service.    The post will remain vacant for the present.

After 16 years serving the Committee, Peter Morrison has found it necessary to stand down from his Committee work, which included the entertaining Raffle programmes as well as our CPF Co-ordinator.   He will certainly be missed, including his performance at our St George’s Dinner Sing-a-Long.

Both Tricia Heard and Rob George have stood down from active Committee work, but have expressed their wish to remain as volunteers for the various non - Committee activities which are vital to keep the Branch retaining its fine reputation.    Rob brought valuable technological skills, particularly during our General and local elections.   Tricia for her partook over the late Pamela Marks’ vacancy and her experience, enthusiasm and valuable support was much appreciated.

Our team of 12 Patch Officers continue to be an important link with our supporters, particularly those without email.  Whereas there were fewer events needing deliveries in 2020, no doubt (Covid permitting) they will be busier in the build up to the elections in May.   Their valuable contribution is always appreciated.

We were very disappointed with the degree of cynicism shown in Sasha Swire’s book regarding West Hill and in particular the criticism of the late Pamela Marks which were most unfair and quite inappropriate.  We have written to Sir Hugo Swire expressing our thoughts.

During the year our caterer Tom Klampfer and his team chose to cease their catering activities.   They have served us well, in many senses of the word, and we are convinced that their cuisine made such a big difference in securing the high number of attendees at our West Hill events.   We are actively looking for a replacement.

Whilst we did not know what 2021 will bring we commenced planning in December for early events and nevertheless booked our speakers for the February AGM in February and the St George’s Day event in April.

2021 sees two elections in May, including Devon County Council, and the Police & Crime Commissioner appointment.

The East Devon Conservative Association held a number of Executive Council events during the year, using Zoom, at which your Branch was represented.

The SW Conservative Association which covers Avon & Somerset, Dorset, Devon & Cornwall held its Virtual Conference on February 6th during which a number of Awards were made, including the Branch and Chairman who have done the most fundraising in 2020.   This Award has come to the West Hill Branch, for which we should be justly proud.

With all the problems, the work must go on!