Simon entered the voluntary side of politics in 1964 at the age of 15 as a Young Conservative in East Edinburgh Constituency…a long-held Labour, now SNP, seat. He also sat on the Scottish Central YC Committee. He moved south in 1967 and continued his activity in South Bucks and Chesham & Amersham  as well as holding office in the Bucks, Berks and Oxon Area before moving with his wife Mary to Devon for a “lifestyle change” to run a B&B in 2011. His activity continued in Tiverton and Honiton where he was an Association officer and branch chairman. On retirement Simon moved to Sidmouth where he is branch chairman of Sid Valley and Association President.

Simon has held numerous positions in the party as Area Officer and Chairman, Association Officer, Chairman and President as well as branch officer and chairman. He was awarded the OBE for Political services in the 1995 New Year’s Honours.

He has had a multifaceted business management career working for national and international companies in Sales, Marketing,  Relationship Management and Non-Exec director  roles. He also ran his own business for four years. 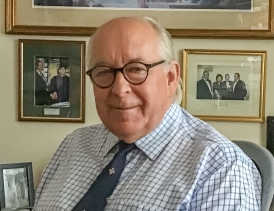